You Jump, I Jump, John Josiah

It isn’t much of a stretch to say that if you are ever wondering why Augustus Crane of Acorn Hall did something, check if his big brother John Josiah did it first. Orphaned as teenagers, John Josiah was closest in age to Augustus out of all their siblings, and if extant records are any indication, he was also the one with whom Augustus maintained the closest relationship. From career choices to architectural preferences, John Josiah looms large as a central figure and beloved role model in Augustus Crane’s life.

The youngest of five surviving siblings, Augustus was only 15 when he lost his father. It was just a year later when his mother also passed. At the time, John Josiah was abroad, and the adoring letters they wrote each other serve as the first records of their relationship. Some years after his return, around 1841, John Josiah began a distilling and rectifying business in lower Manhattan. No points for guessing what Augustus started around 1842. John Josiah left the industry around 1854; Augustus left around 1856.

Both brothers relocated to new homes outside Manhattan around 1857. John Josiah moved to his large residence called “Sunny Hill” (top left) in Morrisania, what is today the Bronx. That same year, Augustus purchased Acorn Hall (top right), and in 1860, expanded the Georgian Foursquare to its current appearance, including the addition of the tower, dining room, and Italianate elements. Do you think he had builder Ira J. Lindsley first take a trip out to Sunny Hill for inspiration?

This pattern continued for the rest of their lives. In 1868, when Augustus’s daughter Mary traveled to St. Augustine, FL, it was with John Josiah’s family. When she married the following year, the list of potential guests teemed with his business associates. When youngest son Benjamin Crane went out to San Francisco in 1874, it was almost certainly with John Josiah’s company, which operated in the city. Even Augustus’s choice of final resting place is tied to John Josiah. The elder Crane brother purchased two adjoining plots at Green-Wood Cemetery in 1844, selling one to Augustus. To this day, the two men’s families still lie side by side. 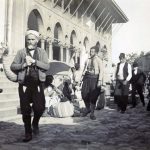