Finding a Johnston in a NYC Haystack

This side of “John Smith,” John Johnston is about as common a name as can be imagined. In 1886 alone, the year MCHS’s St. Cecilia stained glass window was completed, there were 24 listed in the New York City directory. So, when it came to piecing together the life of the artist to whom she is attributed, hopes of finding much were rather dim. However, as luck would have it, the painfully common name masked uncommon origins. It would just require a little piecing together.

John Humphreys Johnston, the artist formerly known as John Johnston (he legally changed his name in 1888), moved to Europe within two or three years of St. Cecilia’s completion. While he returned stateside at least once for a show of his watercolors in 1894, he resided in Italy and France for the rest of his life.

In 1899, he married Anne Lazarus, sister to Emma Lazarus of Statue of Liberty fame, at a Venetian villa, and that is where the fun began. Their New York Times wedding announcement named not only his father, James Boorman Johnston, a prominent NYC merchant, but also his esteemed uncle, John Taylor Johnston, first president of The Metropolitan Museum of Art. His father, then uncle, owned the 10th Street Studio Building that for decades served as the home base of Johnston’s beloved employer and mentor, renowned stained glass artist John La Farge.

John Johnston may have moved in rarified circles, but a surprisingly small sphere. Nearly his entire world prior to his relocation to Europe can be found on a single block in Manhattan. The 10th Street Studio Building was feet from his father’s house at 14 W. 10th Street. The Lazarus family home was two doors down. At the other end of the block was Church of the Ascension, site of the two other known windows attributed to Johnston. The date on those windows is yet to be determined, but very likely coincided with La Farge’s execution of an enormous mural behind the church’s altar (1886-8). Thus, St. Cecilia was likely Johnston’s first independent stained glass work, although he had worked for La Farge for years, assisting him in the creation of his early magnum opus, the windows of Trinity Church, Boston. Interestingly, however, by the time Johnston died in Cannes in 1940, he was remembered as an art collector rather than an artist in his own right.

With documentation of St. Cecilia’s commission and creation so limited, building this understanding of John Johnston provides critical insight into the window’s historic context and artistic origins. An ironclad document revealing the whole story of how the Cranes came to commission her or with whom – La Farge or Johnston – may never appear, but separate research into the Crane’s New York connections reveals a multitude of tantalizing potential ties between the family and both artists. That, however, is a story for another day.

Check out our blog, She’s Ready for Her Close-Up, Mr. DeMille, to learn more about MCHS’s conservation of St. Cecilia. 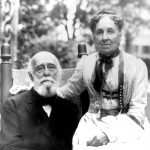 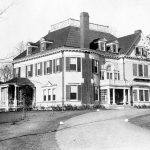