The Bracket King of Morristown

Certain episodes in the centuries-long story of Acorn Hall and the Crane family can be rendered in remarkable detail thanks to extant records. Others were lost to time and will likely always remain hazy, or so we thought. It was long believed, though never definitively verified, that Acorn Hall was expanded to an Italianate-style residence in or before 1860 by local builder and neighbor, Ira J. Lindsley. Now, newly donated archival material and renewed inspection of long-held family documents allow MCHS to paint a far more vivid picture of Acorn Hall’s transformation than we ever imagined possible.

In June 1857, the Cranes purchased a Georgian Foursquare in Morristown then known as Schermerhorn Place and the family of six took residence before the 1860 census when they were all listed at their new country home. Two new pieces of evidence reveal what happened next. An 1870 letter from Augustus Crane to his son Augustus Jr., revisited this summer as a part of an ongoing initiative to transcribe documents in MCHS’s family archives, fortuitously mentions in passing that the dining room addition and central tower began in spring 1860. Donated in 2021 by the Rev. Canon James Elliott Lindsley, Ira J. Lindsley’s c.1860 daybook confirms Crane’s account. In early March 1860, Lindsley noted working at the home, and later that month was joined by the rest of his team of carpenters for the project: Albert Roff, Ezra Cooper, Leonard Valentine, Edward Vanhouten, and William Birch. While a few other men worked sporadically at the Hall, the others continued steadily through the end of September. Lindsley, in particular, clocked days at the Hall into the autumn and early 1861.

Included in the donation were also invoices from Newark firms for building materials billed to Lindsley and his business partner, Silas Norris. Among the invoice are two that are particularly exciting – one from a sash, blind, and door manufacturer bears Augustus Crane’s unmistakable handwriting, and the other from a mahogany dealer has a notation “Check Oct 24 charge Crane.” The former lists several batches of brackets purchased by Lindsley between mid-May 1860 and mid-June 1860, which closely match the various sizes of brackets that still grace the Hall’s exterior. For added emphasis, each batch has a little “C” for Crane penciled next to it on the invoice.

Such developments are a reminder that our understanding of Acorn Hall is ever-evolving as pieces of the puzzle come to light and are further incorporated into its story. There will likely never come a time where there is nothing new to learn. Questions remain, of course, but are perhaps just waiting for new donations to be made and new discoveries to be found. 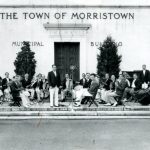 Back (in Time) to School 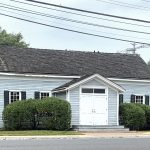