The passing of their daughter, Mary Hone (née Crane, 1849-1876), was a devastating blow to Augustus and Mary E. Crane. Young Mary married John Hone IV, the boy next door, and was the mother of three before her unexpected and tragic death at age 27. Ten years later, her still grieving parents commissioned a remarkable stained glass triptych window in her memory depicting St. Cecilia, the patron saint of musicians, to be placed in the sanctuary at the Church of the Redeemer on South Street in Morristown. Mary was a talented pianist and filled in as organist at Church of the Redeemer as early as 12 years old. The triptych window, framed in mahogany, was installed in 1886. A contemporary article on its September dedication attributes it to Mr. John Johnston, the devoted assistant to renowned stained glass artist John La Farge.

John La Farge (1835-1910), a contemporary and rival of Louis Comfort Tiffany, first began working in stained glass in 1875 and patented opalescent glass, for which he became known, in 1880. To achieve subtle effects, La Farge utilized plating, layering up to 7 sheets of glass, to get the exact color and luminosity he sought. Unique in his style, he frequently incorporated jeweled glass (the “stones” along the outside of the St. Cecilia window), wrinkled glass, and cabochons.

John Humphreys Johnston (1857-1940) joined his studio in the early 1880s and remained devoted to La Farge until his death. In October 1883, La Farge formed the La Farge Decorative Art Co. The following year, he completed The Vision of St. John the Evangelist for Trinity Church of Boston, a window John Johnston assisted him on that shares some remarkable similarities with the St. Cecilia window. While a brilliant artist, La Farge was not a savvy businessman and his company dissolved by bankruptcy in 1885. Following a court case with his partners, he travelled to Japan with a friend in June 1886, leaving many important business obligations unfinished. He did not return to New York until late that Fall, and therefore was out of the country for the unveiling and dedication of the St. Cecilia window. Upon his return, La Farge worked independently out of the 10th Street Studio Building with the help of assistants, John Johnston likely among them. Johnston spent much of his time between 1890 and his death in Europe and only two other existing windows are known to be attributed to him: the Lothrop Memorial Window (The Vision of St. John) and the Loomis Memorial Window (The Two Marys at the Sepulchre), both at the Church of the Ascension, also on 10th Street in New York City.

Historical documentation of the window is sparse, and only one historic photograph of it survives; an undated black and white showing the window in its original form. The fate of the two side windows is unknown, but were possibly destroyed in a 1902 fire in order to save the central window. A new stone church was constructed next to the wooden one in 1917/8. When the new parish house was built on site of the original church, the St. Cecilia window was installed in a stairway that kept it very near its original location.

The window remained in the parish house stairway until 1992 when the Vestry of Church of the Redeemer voted unanimously to donate the window, by then in need of significant conservation, to MCHS. At the end of 2019, MCHS completed restoration of Acorn Hall and its original family art gallery where the St. Cecilia Window is now housed on permanent display for the public to enjoy following conservation of the window by Serpentino Stained Glass Studio of Needham, MA in September 2021. 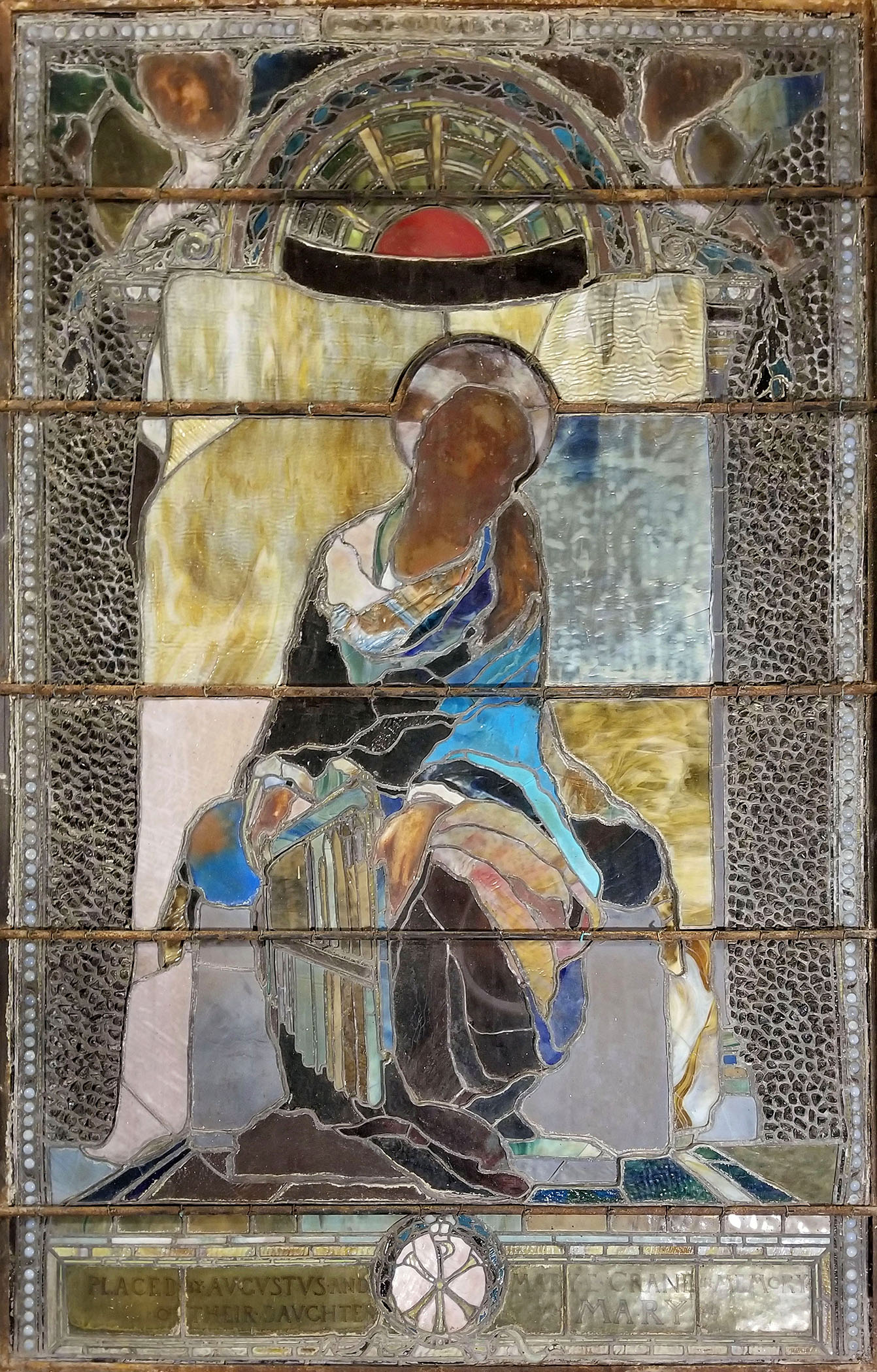