In addition to archaeological exploration of Jacob Ford, Jr’s (gun)powder mill on the Whippany River just behind Acorn Hall in 2019, MCHS, with the aid of Hunter Research, also dug into the historical record to unearth the mill’s role in the American Revolution. From previous research in the 1970s by Fred and Isabel Bartenstein, its creation was well-documented, but the longevity of its operation and contribution to military stores were largely unknown. However, new (well, old, very very old) documents not only confirm the powder mill’s operation through at least November 1779, but also exactly how much gunpowder it was delivering, down to the half a pound.

Constructed in 1776, production at the mill from 1777 to 1778 may have been limited. Jacob Ford, Jr. died in January 1777. Later that year, his neighbor Capt. Joseph Lindsley, purchased his share of the enterprise, buildings, materials, and stock from Ford’s executors according to an indenture held by Morristown National Historical Park. However, for much of 1778, Lindsley was away from Morristown, serving as a major in the Morris County militia at Monmouth and elsewhere. Hints of the mill’s operation continue at that time, but no records of deliveries of powder to the Continental Army are known to exist.

Then, beginning in April 1779, excitingly detailed records emerge, kept largely by Samuel Hodgdon, Field Commissary of Military Stores, a delightfully exact individual. In them, he noted the precise number of barrels, pounds of powder, and types being sent to and from the mill. Quartered at Pluckemin, then at Camp Chester in Orange County, NY, Hodgdon sent hundreds of pounds of damaged powder to the mill to be remade and also placed orders for both musket and cannon powder over the following seven months.

The mill disappears from commissary records following one last delivery of 231 lb. of powder by Major Lindsley on November 6, 1779. However, in a slightly gruesome twist, a hint that it continued operation through the end of the war exists – according to his Revolutionary War pension file, Joseph Lindsley was blinded in 1792 when his head was crushed by a water wheel, likely at the mill. So, while there is reason to believe it was producing powder during Washington’s famous second encampment at Morristown in December 1779-June 1780, what role the mill might have played at that time still needs some digging to unearth. 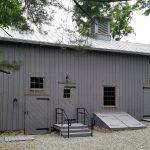 You Are Hereby Summoned to Henry Mooney's Tavern 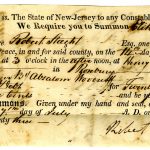