In the late 19th century, Randolph, as a resort destination, flourished as doctors from New York City and Philadelphia recommended the area for its healthy climate and clean air. To sustain the influx, early Jewish residents established boarding houses which transformed into hotels as demand increased. Many visitors settled, attracted by the affordability of surrounding farmland. Continued development and settlement throughout the 20th century resulted in a vibrant community of residents and visitors who lived surrounded by the picturesque setting of summer playgrounds for nearly seventy years.

Emil H. Vannier did not intend to be a trendsetter when he opened one of the first hotels in Randolph in 1880. But, by the turn of the century, boarding houses like his and Max and Yetta Levine’s (1909) became increasingly popular as people discovered the tranquil area, removed from the pollution of large cities. By the 1920s, hotels replaced boarding houses, to accommodate tourists. The largest of these hotels included Leiberman’s Royal House, The Saltz, and The Ackerman and offered special amenities. The Ackerman, for example, offered a large formal dining room, a cocktail lounge, and a “Hollywood filtered pool,” as water purity and unique filtration systems were a major selling points for hotels. Capitalizing on the idea of purity, The Klode Hotel, decided to build a lake on their property to promote a natural beach experience.

Bungalow communities gradually formed throughout the town to meet the demand for summer lodging. These communities centered around pools claiming, at times, to be fed by “artisanal wells.”At its peak, in the inter War years, Randolph’s population increased from 3,000 to 15,000 residents during the summer. After World War II, families, however, took advantage of new highway construction to venture further from home. Randolph slowly transitioned into a residential area, replacing its bungalow colonies with single-family suburban homes.

Where Randolph is no longer a resort, it has transformed a number of former community hubs, such as the local casino and the Ackerman Hotel’s restaurant, into public buildings. as the local senior community center and public library. These modern adaptations allow current residents and visitors to catch glimpses of former resort life, while catering to the needs of the present day. 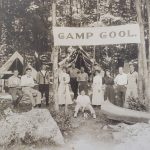 Just Ad Animals: A History of Advertising with Animals