While all roads might lead to Rome, navigating them can still prove tricky. Today, Google Maps may eliminate some of the navigational guesswork involved in driving, but the idea of putting directions into the hands of drivers is not new. In the early twentieth century, the automobile grew in popularity, skyrocketing to 20,000,000 registered vehicles in the US by 1925. With so many people climbing behind the wheel and traveling beyond their local community, the shortcomings in America’s unpaved and largely unmarked roadways became more evident. Joseph W. Jones’s 1909 invention of the Jones Live-Map, proved the solution for getting lost.

Jones’s Live-Map was “a glass-enclosed brass dial,” that connected to an automobile’s odometer by cable. Dubbed the “phonograph of the road,” it used interchangeable paper discs. With the movement of the automobile’s wheels, the dial shifted to a new point on the disc, allowing drivers to know where they were in their trip. $75 bought 12 discs with the option to add more for $0.25 each. This navigational know-how might have seemed priceless, and early motorists were promised a sense that they “ha[d] in [their] car a man who knows every road, every corner, every crossing, every landmark, every puzzling fork and crossroad in the entire world.”

One corner of the world captured in the Jones Live-Map was Morris County. Within MCHS’s collection is a 1910 Live-Map containing a disc with directions for a journey from New York to Morristown, via Montclair. Attaching the device to their odometer, County residents and visitors, alike, could follow detailed instructions from Columbus Circle to their destination. The Jones-Live Map also incorporated local landmarks into its guide, directing motorists to “cross two bridges” in Pine Brook and later, “turn sharp left at hotel” in Denville.

Not content with simply providing drivers a means to navigate difficult roadways, Jones also aimed to improve the condition of the nation’s roads by testing newly completed highways. As these highways improved and became more permanent, cheaper paper maps were made, replacing the Live-Map, but not before they left their mark. Today, as head-scratching drivers praise Siri, they might also add a word of thanks to Jones, too. 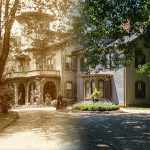