The Father of the American Christmas Card

When imagining a holiday card, one might envision holly, reindeer, poinsettias, Santa – y’know, Christmas stuff. However, the imagery on the earliest Christmas cards could be downright summery with rarely a wreath or sleigh bell in sight. Like many holiday traditions, they were a surprisingly recent invention, only truly gaining popularity following the Civil War.  Then, sending Christmas cards to loved ones far and wide rapidly took off, helped in no small part by the man dubbed “The Father of the American Christmas Card,” Louis Prang (1824-1909). His innovative cards brought holiday greetings alongside snow, angels, and sometimes apple blossoms.

A German immigrant, lithographer, and publisher, Prang got his start as an apprentice to his father, a textile manufacturer, dying and printing calico. He immigrated to the US in his mid-20s, and by 1860 was running his own printing business, L. Prang & Co. By 1881, the company’s factory, the first to mass manufacture Christmas cards, had 300 workers and produced 5,000,000 cards annually. Mini works of art, the cards were typically large, double-sided, and often bordered with silk fringe. MCHS has two such cards within it archives from the 1880s, each double-sided and marked “L. Prang & Co. Boston” in dainty little letters at the bottom.

Around that time, Prang also began hosting card design contests with famed titans of American arts and design such as stained glass artists John La Farge and Louis Comfort Tiffany and architect Stanford White serving as judges. He maintained his reign at the top of the industry until switching his focus to other endeavors in the early 1890s. However, the tradition he began lived on, and as a new century dawned, the imagery we more closely associate with the holiday were common sights on cards and other ephemera.

Dashing Through the Snow... 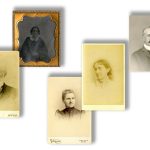