While Acorn Hall served as the home of the Crane-Hone family for over a century, another family played an integral part in the Hall’s long history: the Basses.  Both born in Oxford, NC, William and Mary Alice Bass moved to Morristown around 1930, and shortly after, their two sons Vernon and Robert were born. As Black Americans, the Bass Family faced a segregated Morristown community where discriminatory laws were enforced in many locations. Coming to work and live at Acorn Hall in 1936, the Bass family shaped daily life at the Hall, while they created a home and established enduring roots in the area.

At the Hall, William Bass served as butler and chauffer to Augustus Crane Hone and his wife Alice, while Mary Alice Bass worked as the housekeeper. In these capacities, they were involved in nearly all aspects of life at 68 Morris Avenue, from driving the Hones to preparing every meal, which included Mary Alice’s locally famous pies. However, more than just hired staff, they shared an almost familial relationship with the Hones. Indeed, Mary Alice Bass and Alice Hone often spent time with each other and went on shopping trips to NYC. William was given Augustus’s 1936 Ford four-door convertible and Alice wrote him a glowing letter of recommendation when he applied for his next position as a professional at Picatinny to support the war effort.

In addition to keeping up with their chores, Vernon and Robert Bass contributed a daily dose of entertainment and youth to the Hall. With nooks and grand staircases, the Hall was their playground, and the two young boys found no shortage of places to hide or banisters to slide down throughout the home. Vernon and Robert also had a pet duck, gifted to them by Alice, which legend has it took many a ride in Acorn Hall’s elevator while the boys slid down the banister. Other trinkets, such as toy trains, sometimes spilled over onto the dining room table, where the Bass and Hone families ate dinner together regularly.

In 1942, when William Bass accepted his position at Picatinny Arsenal and moved to Linden Street, but the family maintained a close relationship with the Hones, as they continued to establish their home in Morristown. Becoming members of Calvary Baptist Church, sending their sons to the public school system, and joining local clubs, they remained in the community for the rest of their lives, and set down roots as strong as those of Acorn Hall’s Northern Red Oaks under which they once lived. 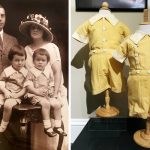 Puttin' on Your Sunday Best