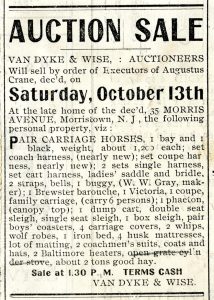 Augustus Crane spent nearly half a century as a well-respected gentleman farmer, pillar in the Morristown community, and general man-about-town. However, there was a side of him that would’ve been lost to history if not for the auction of Acorn Hall’s carriage house contents held shortly after his death in 1906. In addition to being the hub of Crane’s daily farming activities, the carriage house safely stored perhaps his most prized possessions… his carriages.

Crane’s 1860s checkbook register lists monthly deductions “for Mrs. C to shop;” NYC’s Arnold Constable & Co. being her favored place. The auction notice indicates that her regular excursions may not have been solitary endeavors. Beginning in 1859, William H. Gray was one of the largest carriage dealers in NYC, located just blocks from Arnold Constable, and likely the manufacturer of Crane’s buggy listed in the notice. From this, it’s easy to imagine their trips to the city to indulge in their favorite pastimes, with Mr. Crane leaving “Mrs. C” at the department store before continuing to Gray’s vast showrooms around the corner.

Less than five years after formally taking resident, Augustus Crane, a father of four young children, had more carriages than anyone else on Morris Avenue, a street that included some very wealthy and well-connected societal individuals. Crane’s collecting seems to have continued as the years ticked by because the auction included a Brewster Barouche, the Rolls Royce of carriages; a Phaeton, a sporty two-person open carriage built for speed; a Victoria, a carriage of French origin and favored among the most wealthy; and the 6-seat family carriage, still among his fleet two decades after the last child left home.

In all the family archival material we hold, Augustus Crane presents as a mild-mannered, astute, and business-minded head of household who doted on his wife and loved his children dearly. In the auction notice, we also learn about a man with an apparent ‘need for speed,’ who also maintained a sentimental side, and took great pleasure in the daily decision of which carriage to take. 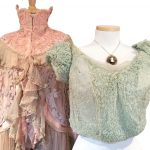