Just Ad Animals: A History of Advertising with Animals

Cute dogs make for a great advertising logo, right? Victor Talking Machine Company (VTMC) must have thought so, too, when they made Nipper, a terrier from England, their mascot after seeing him in an 1898 painting titled “His Master’s Voice.” VTMC opened shop in 1901 in New Jersey selling phonographs. At the time, Nipper’s expression probably resonated with humans. After all, his confused face staring questioningly into the phonograph may have matched those of his human counterparts. Throughout their run into the 1940s, over seven million Victrolas were sold in the U.S. While sales may not reflect the appeal of animals alone, their use in advertising has proven popular with the public and effective as a marketing booster for over a century.

Since 1928, Walt Disney’s infamous Mickey Mouse has brought smiles to the faces of children. After losing the rights to his first character, Oswald the Lucky Rabbit, Disney quickly needed to find a replacement. Since then, the use of Mickey Mouse, like the use of Nipper, has succeeded in drawing positive attention. After 92 years, Mickey Mouse still proves popular due to his careful transformation from cartoon to symbolic reminder of childhood. One of the highest-earning fictional characters ever created, Mickey Mouse is now a franchise worth over $180 billion.

Shortly after the repeal of Prohibition in 1933, August A. Busch’s sons gave him a beer wagon and a team of Clydesdale horses to go with it. Noting their marketing potential, Busch sent them on high profile beer deliveries ranging from the Empire State Building to the White House. Along the way, the team attracted thousands of admirers and Anheuser-Busch’s Clydesdales have been admired ever since. Their draw has become so pronounced that after appearing in more than 25 Super Bowl commercials since 1986, in 2010, when Anheuser-Busch announced that the team would not appear, the public rallied and successfully changed the company’s mind. Annually, the different teams appear in over 900 paid events, reinforcing the Clydesdales’ standing as an enduring symbol of the brewery’s legacy.

Part of the psychology behind the successful use of animals in advertising, according to the University of Southern California’s Advertising Department, is that people empathize with animals, and therefore draw closer to ads featuring them. This in turn, can elicit positive connotations with certain brands, which may lead to sharing a brand with others, leading to higher profits and greater brand recognition. While the Victrola had its peak over 100 years ago, and Mickey Mouse is nearly 100 years old, their images remains iconic, implying that animals often resonate well with people and provide lasting brand recognition.

Thinking vs Feeling: The Psychology of Advertising
https://appliedpsychologydegree.usc.edu/blog/thinking-vs-feeling-the-psychology-of-advertising/ 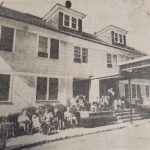 In 2021, Morris County History Comes to You