As national interest in historic preservation grew, resulting in the passage of the National Historic Preservation Act (1966), the oldest existing house still on its original foundation in Morristown became the site of an ambitious, experimental endeavor known as the American Civilization Institute of Morristown (ACIM). Focused on the mid-18th century Timothy Mills House, the ACIM spearheaded a grassroots effort to study and share local history.

The ACIM was developed by members of Morristown’s school system, superintendent Dr. Harry Wenner, Social Studies teacher John “Jack” Stewart, and former Board of Education member Dorothy Harvey. It provided local high school students with the opportunity to research their community’s history in a multidisciplinary manner, combining fields such as archaeology, history, sociology and dendrochronology. Emphasizing the idea of collaboration, they invited anthropologist Dr. Gene Weltfish and students of Fairleigh Dickinson University (FDU).

Over the summer of 1967, the ACIM began preliminary work at the Mills House, gathering information about its original owner and his descendants from town records and artifacts found at the site. Compiling their findings into a booklet, participating local high school and college students, along with their mentors, provided insight not only into the religiously and politically active Mills family but also the community that existed since Morristown’s pre-Revolutionary days. In the community-focused spirit of the ACIM program, the Timothy Mills Family Book was made accessible to the public through various institutions where it can still be studied today.

After several years of projects, which included further work at the property, the ACIM concluded its program in 1969 after a final symposium. While never replicated, during the program’s tenure over three hundred students and numerous area professionals analyzed local history and shared their findings. 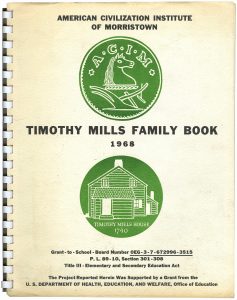 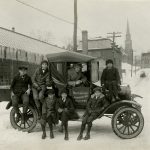 Morristown Through the Lens of a Local Family

You Jump, I Jump, John Josiah 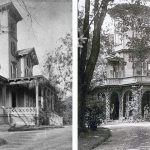