Windows, both literal and metaphorical, into the history of Morris County’s Greystone Psychiatric Hospital are on display at Acorn Hall. A pair of stained glass windows from the chapel grace the Hall’s family art gallery, and kitchen lists from both the main building and annex are on exhibit through February 13th. These two sets of artifacts, held in MCHS’s collection, shed light on the attention given to the design and construction of the once state-of-art facility. Built upon the philosophies and beliefs that fresh air, sunlight, and recreational activities held curative properties Greystone was, at its founding, on the cutting edge for the treatment of mental illness.

First opened in 1876 as the State Asylum for the Insane at Morristown, the hospital included a medical library, dining rooms, dormitory, laundry and even an “amusement room.” However, two spaces, the chapel and kitchen, received particular attention before and after construction, and both spaces had a central location in the newly completed building. The chapel especially, beyond what was strictly necessary, was designed to create a welcoming space and calming respite lit by stained glass windows and adorned with frescoes throughout.

Two years later, when the hospital was featured in Scientific American, it highlighted not only the “tastefully frescoed” chapel, but also the extensive kitchen with its large three-oven range, broiler, cake baker, and eight cast iron steam ovens for roasting up to 25 lb. of meat each. By 1911, the year of the kitchen lists in MCHS’s collection, an additional annex building and kitchen had been erected, and construction of yet another kitchen was underway. While patients grew food  such as lettuce, onions, radishes, tomatoes, green beans, watermelon, and corn on Greystone’s expansive grounds, this only supplemented the enormous quantities needed, according to the April 1911 kitchen lists.

Demolished in 2015, Greystone’s history is now somewhat mythic, with few tangible objects left to tell its story. Our windows and kitchen lists, however, provide critical and enduring insight into the founding tenets of the institution, and how its core philosophy influenced everything from its construction to its daily operation. 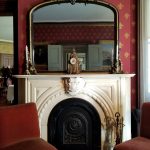 King Kahn and His Royal Court 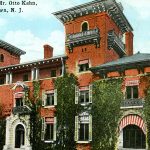